My (Not-Quite-Awkward) Adventure as a Pin-Up Model 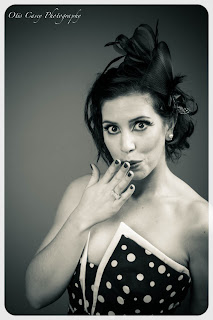 We interrupt your intermittently scheduled costume blogging to bring you something completely different. I celebrated my 30th birthday by becoming a one-time pinup girl.

First of all, I should begin this post by explaining a little bit about my history. In grade school, I was the fat kid. It was a small school, so even if I was simply just a bit larger than the other waif-ish girls, I still ended up being the largest girl in the class. And that's ridiculous, because I was a really active kid. Ballet (biggest girl there, definitely), horseback riding, soccer, softball... Every season I was doing something that kept me in great physical shape. I was just bigger than the other kids. And boy, did that mess with my head. And things didn't improve when I put on the freshman 15+ (and sophomore 15) in college. Up until about age 29, I was never really comfortable with my body.

But then something flipped. Call it maturity, the newfound love of running half-marathons, Saturn in Return, whatever. This past year, I've come to really love my body. It's healthy. It's well-proportioned. It gets things done. I still have those problem areas, of course. Who doesn't? But I've stopped actively insulting my frame. I'm not fat. I was. But I've come a long way. I still have issues accepting my funny ol' face, but I'm working on that.

So to celebrate the fact that I hit a milestone, and because I wanted to embrace this newfound confidence, I signed up to do a pinup shoot with the New York Pinup Club.

I was immediately intimidated. I know clothes. I know how to make sure they look great on a body. I don't know modeling. It's different when it's a costume I'm in, or the hallways of a convention. That's a piece of art I'm showing off, or I can channel bits of the character and be silly. This shoot was going to just be me. In retro clothes/foundations, but me. No characters to hide behind now. There was going to be a wardrobe stylist, a makeup artist, a hair stylist... Usually that's the side of the camera you'll find me on.

But I did it anyway. And these folks made me feel like a rock star. What an ego boost, I swear. Brandon Herman, the photographer & organizer, was wonderful. He was encouraging, friendly... patient... Even if the shoot happened early the day after a major blizzard and everyone had trouble getting to the studio on time.

And you know what? I'm so happy I went through with it. Of course, I found things to critique, but the thought that immediately followed those negatives? "Well, now I know for next time!" Next time? Ask me a year ago, and I would have laughed about doing it a first time!

After this adventure, I would absolutely encourage any woman to do the same. What a rush. I did this for me. I wanted to celebrate being 30, being happy, and have something a bit more lasting than a massage or pedicure. I now have an image that I can look at and say to myself "Dang, girl. What was holding you back all those years?" And I plan to take that energy and pay it forward into every single day I have ahead of me. And to anyone who might be considering doing something similar? Do it. Seriously: what are you waiting for? You might feel self-conscious or intimidated, but it feels so good to break down that wall.

To be fair, I have absolutely no idea what I'm going to do with these photos other than plaster them on the internet here.. I certainly have no plans to get them framed and hang them on my wall... Wait, no. You know what? I just might do that too. 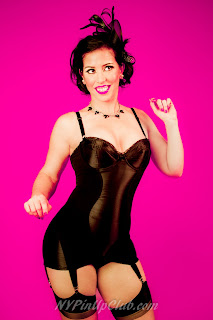 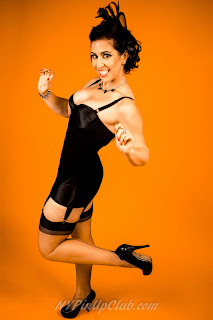 Photos by Brandon Herman.
http://www.meetup.com/nypinupclub
Posted by Betsy at 6:26 PM

Betsy
I think that maybe too much of my life is costume-related, but really, is that such a bad thing?